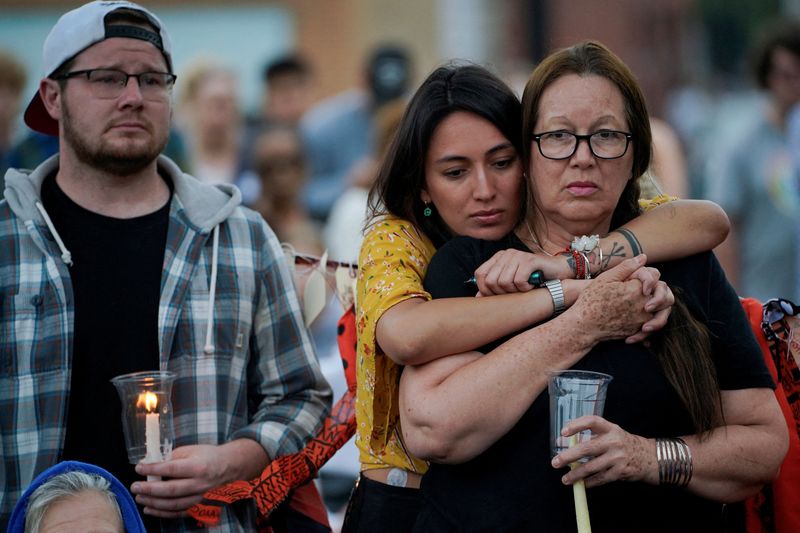 © Reuters. FILE PHOTO: Mourners attend at a vigil in Everts Park after a mass shooting at a Fourth of July parade in the neighboring Chicago suburb of Highland Park, in Highwood Illinois, U.S. July 6, 2022. REUTERS/Cheney Orr/File Photo

By Tom Hals and Joseph Ax

(Reuters) – The gunman accused of killing seven people at an Independence Day parade in Chicago’s Highland Park suburb obtained a firearms license just months after police investigated alleged threats he made to kill his family.

That has raised questions about why the state’s comparatively strict gun laws – including a “red flag” statute and a license requirement – did not prevent him from buying five weapons.

WHAT WERE THE WARNING SIGNS?

Police had two prior encounters with the suspected shooter, Robert Crimo, now 21. In April 2019, they responded to an emergency call reporting he had attempted suicide. In September 2019, they visited his home after a report that he threatened to kill family members.

The family agreed to let police take a collection of 16 knives, a dagger and a sword from Crimo’s closet “for safekeeping,” according to a police report. Crimo’s father told police the weapons belonged to him, and they were returned later that day.

Crimo was not arrested or charged, and none of his family members pressed forward with a complaint against him, according to police.

HOW DID HE PURCHASE HIS GUNS?

Three months after the alleged threat, in December 2019, Crimo successfully applied for a firearm owner identification card, or FOID, which is needed before someone can legally buy guns in Illinois. State police said his father sponsored his application, a requirement for applicants under the age of 21.

On four occasions between 2020 and 2021, Crimo legally purchased a total of five guns, including the one police say he used in Monday’s attack.

WHY DIDN’T THE STATE’S ‘RED FLAG’ LAW COME INTO PLAY?

Illinois is one of 19 states with a “red flag” law that allows family or law enforcement to ask a judge to temporarily prevent a person from possessing or acquiring firearms because the person is considered dangerous.

In Illinois, “clear and convincing” evidence must be presented to a court that the person with firearms presents “a significant danger” to themselves or others. Petitioners can present any relevant evidence, including violent images like those posted on social media by Monday’s accused shooter.

In Crimo’s case, no family member nor any police officer filed a petition seeking to prevent him from acquiring guns. At the time of the alleged threat, he did not possess a gun license, had not submitted any application and did not own any guns.

In a statement on Wednesday, the state police said the evidence available at the time Crimo applied for a license would have been “insufficient” to secure a firearm restraining order under the red flag law.

Illinois is one of the few states to require a license – a FOID – before a gun can be purchased.

The state police agency reviews all FOID applications, including whether an individual has a history of crime or mental illness or is subject to any protective orders, such as a “red flag” restraining order.

The police can also deny an application if the individual is deemed a “clear and present danger.”

Once a FOID is obtained, a person can legally purchase firearms. If the guns are bought from a licensed dealer, the transaction triggers a criminal background check, which includes a federal database.

In Crimo’s case, the Highland Park police filed a “clear and present danger” report regarding Crimo with state police on the day of the September 2019 call.

State police reviewed the report and found the alleged threat was reported “second-hand” to officers, according to a statement.

The agency also noted that both Crimo and his mother disputed a threat had occurred, that there was no probable cause for an arrest and that his father claimed ownership of the bladed weapons in the closet.

“The reviewing officer concluded there was insufficient information for a Clear and Present Danger determination,” the statement said.

When Crimo applied for a FOID three months later, state police had no new information to establish that he posed a danger, the agency said, and therefore were legally obligated to approve the license. Crimo had no arrest record, no mental health history or other factor that would be disqualifying under the law.

Crimo passed background checks when he purchased his guns for the same reason, with only a minor tobacco possession infraction from 2016 on his record.

COULD THE NEW FEDERAL GUN LAW HAVE CHANGED THINGS?

The Bipartisan Safer Communities Act, which President Joe Biden signed into law in June, does not create a federal red flag law but provides $750 million to encourage states to adopt the laws and to educate the public on how to use them.

The law also expands background checks for people under 21, as Crimo was when he applied for a gun permit. The new gun law requires searches of criminal history, juvenile records and mental health records, although legal experts said it seems unlikely the expanded search would have uncovered information that would have disqualified him from gun ownership.

It also requires notifying local police, who might have recognized Crimo’s name, connected him with the threats to kill his family and possibly attempted to prevent him from obtaining a gun under the red flag law, said Christian Heyne, vice president of policy at Brady, a gun control group.