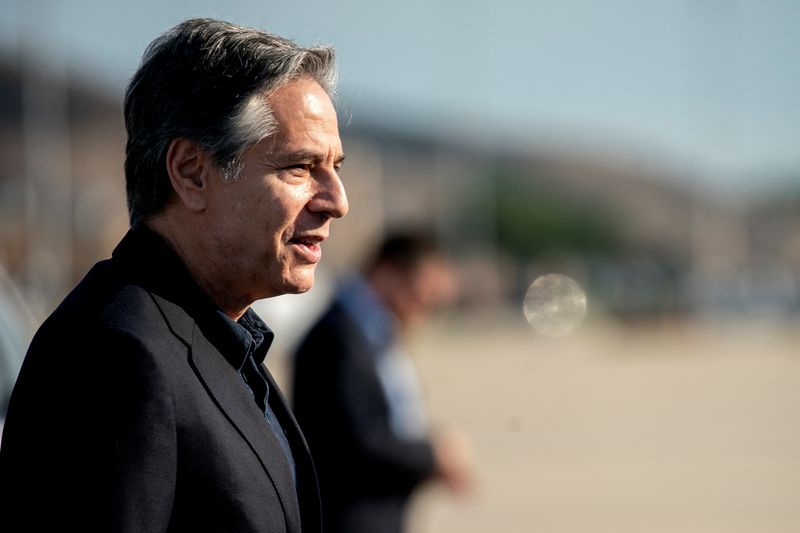 © Reuters. U.S. Secretary of State Antony Blinken arrives at Joint Base Andrews ahead of his travel to Bali, Indonesia for the G20 Foreign Ministers’ meeting, and Bangkok, Thailand, in Maryland, U.S., July 6, 2022. Stefani Reynolds/Pool via REUTERS

WASHINGTON (Reuters) -U.S. Secretary of State Antony Blinken spoke with Pakistan Foreign Minister Bilawal Bhutto Zardari on Wednesday on relations between the two countries as they seek to repair ties that were strained under former Prime Minister Imran Khan.

They also spoke about the situation in Pakistan’s neighbor Afghanistan and about the impact of the Russian invasion of Ukraine on food security in Pakistan and the rest of the world, the U.S. State Department said after their call.

It was the second interaction between Blinken and Bhutto Zardari. They last spoke in May.

Khan, who was ousted in a no-confidence vote in parliament in April, had antagonized the United States throughout his tenure, welcoming the Taliban takeover of Afghanistan last year and more recently accusing Washington of being behind the attempt to oust him. Washington and Pakistan’s National Security Council, a body of top civil and military leaders, dismissed the accusations.

“The Secretary welcomed the 75th anniversary of diplomatic relations between the United States and Pakistan and reaffirmed our joint goals for enhancing U.S.-Pakistan bilateral partnerships on economic stability, climate, and health,” the State Department said in its statement on Wednesday.

Analysts have said they do not expect the United States to seek a significant broadening of ties with Pakistan’s new government led by Prime Minister Shehbaz Sharif, but to remain mostly focused on security cooperation, especially on counter-terrorism and Afghanistan.

Why Some Video Game Companies Are Staying Silent on Abortion