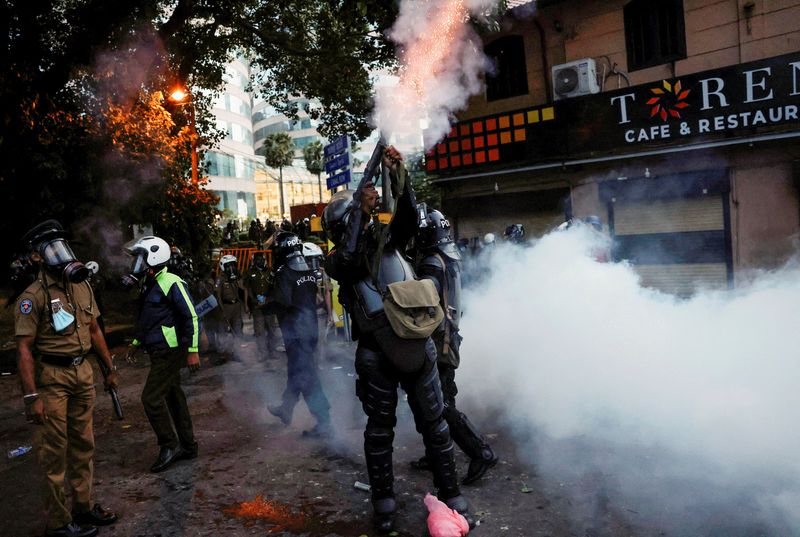 © Reuters. Police use tear gas and water cannons to disperse demonstrators near President’s residence during a protest demanding the resignation of President Gotabaya Rajapaksa, amid the country’s economic crisis, in Colombo, Sri Lanka, July 8, 2022. REUTERS/Dinuka

COLOMBO (Reuters) – Sri Lankan police fired tear gas at protesters on Saturday in the commercial capital Colombo to control thousands gathered for one of the largest anti-government marches in the crisis-hit country this year.

Thousands of demonstrators packed in buses, trains and trucks from across the South Asian nation entered Colombo to express outrage over the government’s failure to protect them from economic ruin.

The island of 22 million people is struggling under a severe foreign exchange shortage that has limited essential imports of fuel, food and medicine, plunging it into the worst financial turmoil in seven decades.

Many blame the country’s decline on President Gotabaya Rajapaksa. Largely peaceful protests since March have demanded his resignation.

They marched towards a police and military security cordon surrounding key buildings, including the President’s House and Finance Ministry, near Colombo’s scenic coastline.

Discontent has worsened in recent weeks as the cash-strapped country stopped receiving fuel shipments, forcing school closures and rationing of petrol and diesel for essential services.

Sampath Perera, a 37-year-old fisherman took an overcrowded bus from the seaside town of Negombo 45 km (30 miles) north of Colombo, to join the protest.

“We have told Gota over and over again to go home but he is still clinging onto power. We will not stop until he listens to us,” Perera said.

He is among the millions squeezed by chronic fuel shortages and inflation that hit 54.6% in June.

Political instability could undermine Sri Lanka’s talks with the International Monetary Fund seeking a $3 billion bailout, a restructuring of some foreign debt and fund-raising from multilateral and bilateral sources to ease the dollar drought.