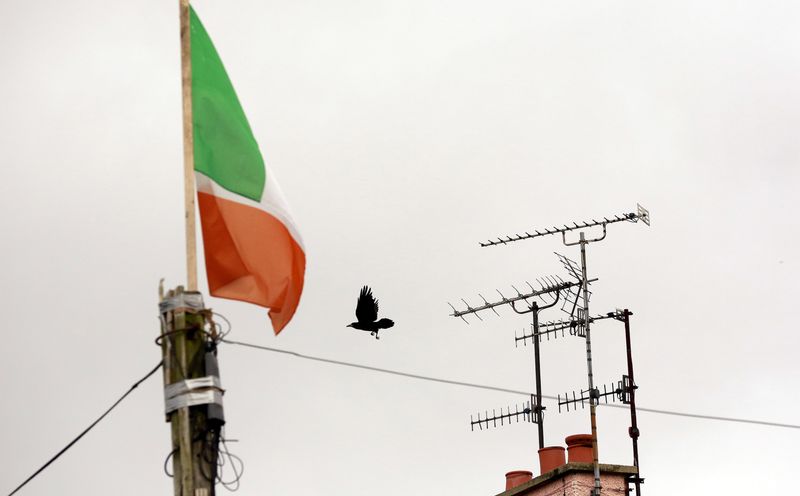 © Reuters. FILE PHOTO: The national flag of the Republic of Ireland flies in the Bogside area of Londonderry in Northern Ireland, September 25, 2015. REUTERS/Cathal McNaughton

DUBLIN (Reuters) – Ireland’s reliance on just 10 multinational firms to pay over half of the country’s soaring corporate tax receipts represents an “incredible level of vulnerability” for the economy, the finance ministry’s chief economist warned on Monday.

Corporate receipts, mostly generated from big multinationals attracted to Ireland by its low corporate tax rate, have surged in recent years and made up almost a quarter of all tax revenues in the first half of 2022 after a 53% year-on-year jump.

The finance ministry said this meant that 1 in every 8 euros collected by the state comes from “an exceptionally small number of firms” and that a shock which impacted on the multinational sector would have severe fiscal implications for Ireland.

“That’s an incredible level of vulnerability,” the finance ministry’s chief economist John McCarthy told reporters, saying the level of concentration in such a small number of firms is something he has never seen in any other economy.

“This is something we’re very concerned about.”

The concentration level is even larger including the income tax paid by multinationals such as Facebook (NASDAQ:), Google (NASDAQ:) and Pfizer (NYSE:), which employ around one in nine Irish workers in often highly paid jobs, McCarthy added.

McCarthy said he was more worried about overreliance on these types of firms than the impact a global overhaul of corporate tax regimes could have on Ireland’s position as a hub for multinational investment.

He also said the treasury would likely take in 18 to 19 billion euros in corporate tax this year, up from 16.9 billion forecast just three months ago and a near five-fold increase in the last decade.

Finance Minister Paschal Donohoe said he has long shared the concerns McCarthy outlined, and said the best way to manage the risk was to return to the pre-pandemic position where corporate tax receipts are not used to fund permanent spending.

His department forecast on Monday that the exchequer would likely post a modest surplus this year but that this was only due to the exceptionally high corporate tax receipts and that if receipts had remained at pre-pandemic levels, a deficit of 1.5% of GDP would have been in prospect for this year.

Ireland on Monday increased its planned budget package for 2023 as a result of the expected return to surplus.

Scientists Are Trying to Grow Crops in the Dark