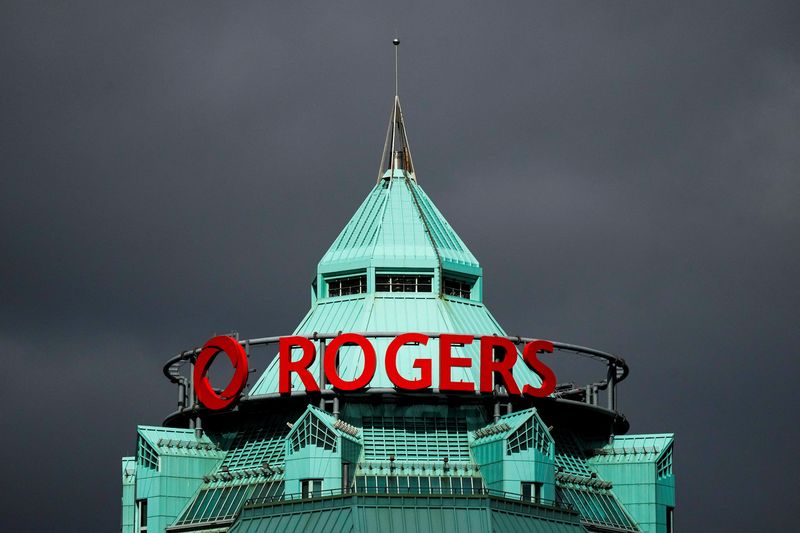 By Chris Helgren and Divya Rajagopal

TORONTO (Reuters) -A major outage of Rogers (NYSE:) Communications Inc’s mobile and internet networks caused widespread disruptions across Canada on Friday, affecting banks, police emergency lines and customers in the second outage to hit one of the country’s biggest telecom providers in 15 months.

Customers gathered at coffee shops and public libraries to access alternate networks, while financial institutions reported problems with everything from automated machines to cashless payment systems.

“We are currently experiencing an outage across our wireline and wireless networks and our technical teams are working hard to restore services as quickly as possible,” Rogers said in a statement.

The outage is likely to add to concerns about competition in the industry that is dominated by Rogers.

The company, which has about 10 million wireless subscribers and 2.25 million retail internet subscribers, is the leading service provider in Ontario, and along with BCE (NYSE:) Inc and Telus (NYSE:) Corp, controls 90% of the market share in Canada.

Earlier this year, Canada’s competition bureau blocked Rogers’ attempt to take over rival Shaw Communications (NYSE:) in a C$20-billion deal, saying it would hamper competition in a country where telecom rates are some of the highest in the world.

“Today’s outage illustrates the need for more independent competition that will drive more network investment so outages are far less likely,” said Anthony Lacavera, managing director of Globealive, an investment firm that had bid for a wireless provider involved in the Rogers/Shaw deal.

Downdetector, which tracks outages by collating status reports from a number of sources, showed reports of outages starting from 4.30 am ET, topping off at more than 20,000 users by 7 am ET. The reports dropped to around 8,000 by 11.30 am ET.

The nationwide outage resulted in some callers facing difficulty reaching emergency services via 911 calls, police across Canada said, including Ottawa and Toronto, its largest city.

Bank Of Montreal (NYSE:) said the outage was affecting financial institutions, toll-free numbers as well as transactions, while Royal Bank of Canada said its ATM and online banking services were affected.

Canada’s Industry Minister François-Philippe Champagne said his team has been in contact with the company.

“We expressed how important it is that this matter be resolved as soon as possible and for the company to provide prompt and clear communication directly to those impacted,” he tweeted.

NO CREDIT, ONLY CASH

It was the second major outage for Rogers in a little more than a year. In April last year, thousands of its customers reported intermittent interruptions to wireless voice and data services for several hours before the company was able to restore full operations to its network.

In Ottawa’s downtown core on Friday, cafes including Tim Hortons were not accepting debit and credit cards, and turning away customers who did not have cash. Tim Hortons did not immediately respond to a request for comment on the impact on its business.

Toronto residents crowded into and around a midtown Starbucks (NASDAQ:) coffee shop offering free wifi on a network unaffected by the outage.

“There’s tons of people here with their laptops just working away ferociously, the same as they would at home, because they’ve got no service at home,” said customer Ken Rosenstein.

An ‘NFL Plus’ streaming service is on the way