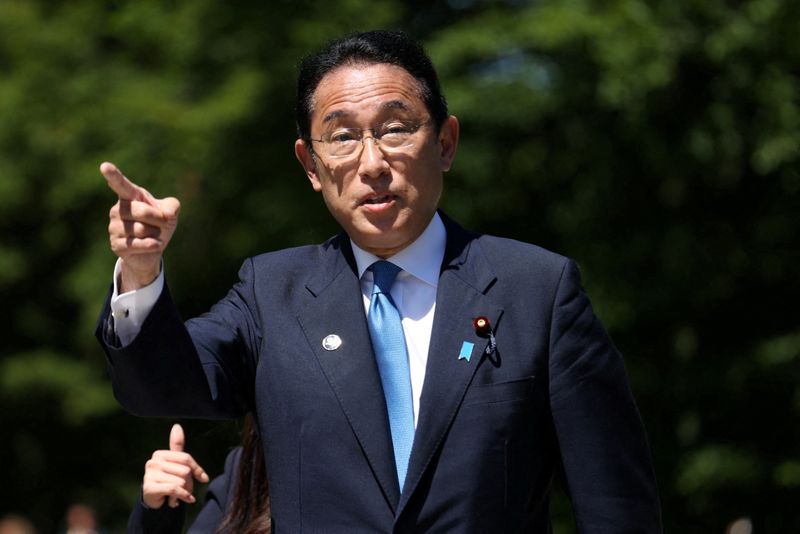 TOKYO (Reuters) -A strong showing by Japan’s ruling party in upper house elections on Sunday would give Prime Minister Fumio Kishida a firmer grip on the factious party and allow him to emerge from the shadow of a powerful predecessor and define his premiership.

If his Liberal Democratic Party (LDP) does as well as polls predict, Kishida will bolster his chances of leading the party into the next election, which must be held by late 2025.

A consolidation of power would give the former banker from Hiroshima the opportunity to boost defence spending and perhaps revise the pacifist constitution, something that even the hawkish Shinzo Abe, Japan’s longest-serving premier who stepped down in 2020, was never able to accomplish.

“This is really Kishida’s chance to emerge on centre stage and define what his own prime ministership will be,” said Shihoko Goto of the Wilson Center think tank, adding that it could allow Kishida to step out from under “a looming shadow”.

After winning an internal party leadership race with Abe’s support, Kishida, who served as foreign minister under Abe, has looked to distance himself from his old boss.

Despite voter unhappiness with rising prices, nobody expects the LDP to take a big enough beating to force a change of government. But, doing worse than expected could weaken Kishida’s standing within the party and make it harder for him to stand up to Abe.

Kishida has pushed back against the neoliberal “Abenomics” of the past decade, instead touting a “new capitalism” that emphasises greater distribution of wealth to boost growth, although details have been thin.

Polls show the LDP winning at least 60 of the 125 sets being contested on Sunday, compared with the 55 it now holds, allowing it to maintain a majority in the chamber with its junior coalition partner Komeito.

Kishida has set 55 seats as his target for victory, which analysts say is well within his grasp. A haul of 69 seats would give the LDP a majority on its own in the upper chamber but that could be a stretch.

Voters could still punish the LDP over rising prices.

Inflation, while modest by global standards, is at its highest in years, squeezing households, many of which haven’t had a pay rise in two decades.

Though Kishida’s support hit a high of 66% in May, boosted by his response to Russia’s invasion of Ukraine that included sanctions, recent polls have shown his popularity ebbing.

A June 27 poll by the NHK public broadcaster showed 50% of voters supported the government.

A less than convincing victory for the LDP on Sunday could expose Kishida to internal party challenges.

“Inflation and the debate over how to pay for defence spending increases are going to consume a lot of time and political capital in coming months,” said Tobias Harris, senior fellow at the Center for American Progress.

Kishida has promised to “substantially” increase defence spending in response to what he sees as fragile security in the region, but he hasn’t said by how much or how it would be funded.

Opinion polls show almost two-thirds of voters support beefing up the military, reflecting concern about China’s might that could also signal softening public resistance to changing a constitution that the United States imposed on Japan after its World War Two defeat to stifle military ambitions.

Kishida, once on the more dovish side of the LDP, has since tacked rightwards and said parts of the constitution may have elements that “are outdated and lacking”.

A relatively strong showing by the Japan Innovation Party could give momentum to constitutional reform. Like the LDP, it favours change.

In the end, the mild-mannered Kishida’s biggest advantage may be that voters find him more likable than the sometimes combative Abe, affording him a freer hand.

“Some of the specific policies that Kishida has put forward, including increased defence spending, have really not met any real opposition from voters,” said Goto.

“Had Abe said the same thing, it would probably have been a little bit different.”