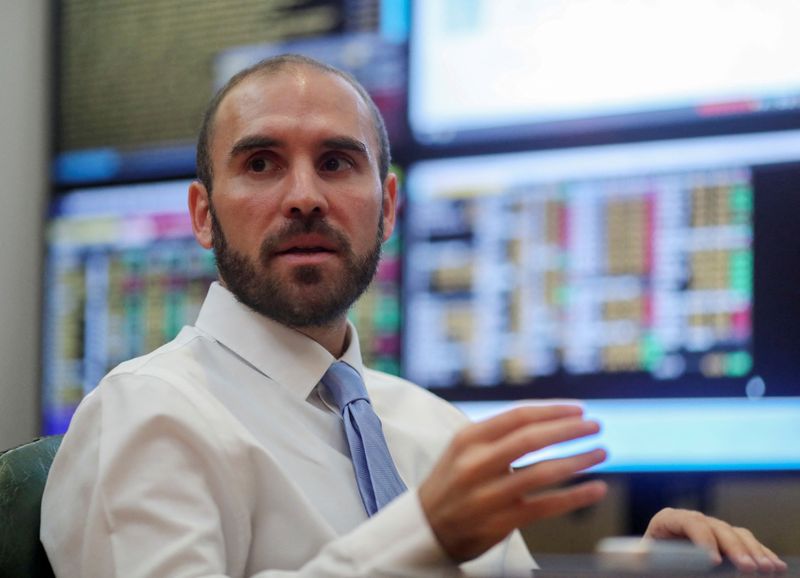 By Jorge Otaola and Eliana Raszewski

BUENOS AIRES (Reuters) – The abrupt departure of Argentina’s economy minister and lack of a clear successor could threaten to further destabilize an economy already shaken by sky-high inflation, rising energy costs and growing fears over possible new defaults on debt.

Martin Guzman, the architect of the South American country’s recent $44 billion deal with the International Monetary Fund (IMF), resigned on Saturday as tensions within the government boiled over as to how to handle the economic crisis in one of the world’s top grain producers.

A relative moderate, he had clashed with the more militant wing of the ruling Peronist coalition around powerful Vice President Cristina Fernandez de Kirchner, who had publicly criticized Guzman and called for more public spending.

The resignation, the highest profile since President Alberto Fernandez took office in late 2019, has uncovered deep cracks in the government, which threaten to throw into disarray the country’s economic management.

“The resignation of Minister Guzman really uncovers the internal rupture in the government,” said Eugenio Mari, chief economist at Fundacion Libertad y Progreso, adding he had been an “anchor” for economic policy despite his struggles.

“From the economic side, it amplifies the dynamic of uncertainty which Argentina was already in.”

On the table now are policies around the country’s peso currency, which is shielded by strict capital controls that have stemmed parallel exchange rates double the official one. Guzman also oversaw tax regimes around grains and energy policy.

Inflation is running above 60% and is set to rise further, while high energy import costs have shackled the country’s ability to increase depleted foreign currency reserves. Sovereign bonds have plunged toward 20 cents on the dollar.

Guzman has been set to travel to France for July 6 talks to restructure some $2 billion in debt with the Paris Club of sovereign lenders, seen as key to reopening access to foreign direct investment needed for infrastructure and energy.

Daniel Marx, former finance secretary and debt negotiator, said it had become untenable for Guzman amid strong opposition within the government. The key now: Who replaces him?

“It seems important to me to see how the void is filled,” said Marx. “Not only the person but the economic policy direction to get out from all the skepticism and the problems that have been dragging on for quite some time.”

On Sunday morning there was no news on a successor and President Fernandez was yet to publicly address the departure, suggesting the government had been caught off guard by the exit.

Some investors were concerned about how the departure would impact the country’s ability to meet its obligations with the IMF, which include targets for inflation, reserve levels and the fiscal balance – all already under pressure.

“This is not good and confirms that there is a political problem,” said Maria Castiglioni, economist at C&T Asesores, adding it raised questions if the government would be able to take the necessary measures to exit the crisis.

Inside the Economy Ministry, where a large part of Guzman’s team also resigned, the feeling was it had become hard to get things done effectively.

“When things were moving at pace, decisions had to be made quickly. When you have no decision at the money table, it is tough,” a ministry source said.

Horacio Larghi, economist and director of consultancy Invenomica, said what mattered most was whether the new economy minister was a lame duck or had license to act.

“As for who replaces him, the name doesn’t matter so much. What matters is whether or not the person will have the power to do anything,” he said.