Former Theranos president Ramesh “Sunny” Balwani has been convicted of fraud in connection with his role at the now-defunct blood testing start-up founded by his former girlfriend and business partner Elizabeth Holmes.

The jury in San Jose, California, deliberated for several days before reaching the verdict on Thursday.

Balwani was convicted on all 12 counts of fraud and conspiracy related to what prosecutors said was a grand plan to hide from investors, partners and customers the fact that the company’s blood testing technology did not work. Its tests were in fact covertly conducted on commercially available machines.

Balwani, 57, was appointed chief operating officer of the company in 2010 and helped promote the claim that the company would revolutionise healthcare by running a multitude of tests with just a few drops of blood, prosecutors said.

He was tried separately from Holmes, who was convicted earlier this year on four counts of investor fraud and acquitted on four additional counts related to defrauding patients. The jury failed to reach a verdict on three further counts related to investors. Holmes will be sentenced in September and faces up to 20 years in prison.

The criminal prosecutions have capped the dramatic collapse of Theranos, following reporting by journalist John Carreyrou, whose account of its rise and fall has been dissected in multiple podcasts and dramatised in television shows.

Theranos attracted almost $1bn in funding from investors such as Larry Ellison and Rupert Murdoch. Its failure, and what was revealed to be a lack of thorough due diligence by a parade of high-profile backers, ignited a debate on Silicon Valley’s “fake-it-until-you-make-it” culture.

During the Holmes trial, which played out in front of throngs of global media, the defence painted Balwani as a sexual and emotional abuser of Holmes, allegations that Balwani has strenuously denied. 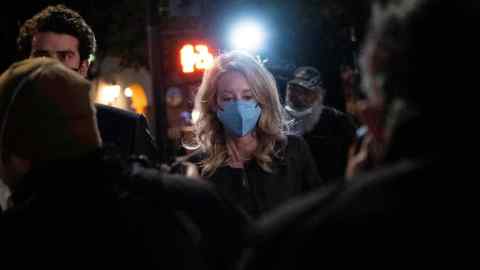 In Balwani’s trial, which generated less media interest, defence lawyers were unable to sufficiently distance him from the actions of Holmes. Prosecutors showed text messages between the pair in which Balwani is said to have written in 2015: “I am responsible for everything at Theranos.”

Balwani, who had pleaded not guilty, was said by prosecutors to have been directly involved in efforts to deceive investors into believing the false claims that pharmaceutical company Pfizer was working with the company. He also inflated revenue projections later used to attract new investment, prosecutors said.