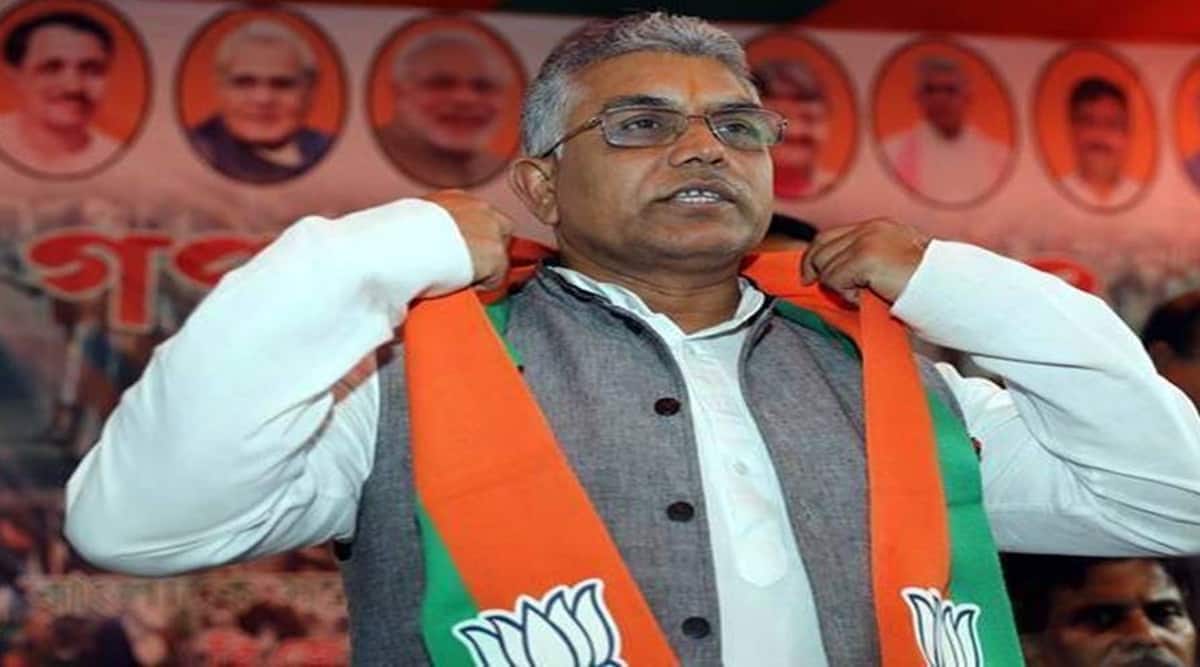 BJP national vice-president Dilip Ghosh has dared the police to arrest him and ruling party workers to “lay hands on him”, asserting he need not learn decency and ethics from “murderer and corrupt” Trinamool Congress, after a controversy erupted over his alleged unsavoury comments against West Bengal Chief Minister Mamata Banerjee.

The Medinipur MP’s latest remarks came only a few hours after a TMC delegation met Governor Jagdeep Dhankhar over the issue, who promised to look into the matter. Ghosh, the former state BJP chief, claimed he did not make any inappropriate remark against Banerjee and his comments were only in reference to her “political opportunism and inconsistency”.

The BJP leader, however, asserted he will continue to speak out against “cut money culture and atrocities committed by TMC on its opponents” even in Bhowanipore assembly constituency, represented by the chief minister.”I dare the West Bengal Police to arrest me. I have not taken any cut money, nor have I killed anyone, burned anyone’s properties or looted them. I haven’t beaten up people for opposing my views either. Still, if the law enforcers want to put me behind the bars, I ask them to send the police,” he told reporters on Thursday night.

“I will not learn ethics or decency from murderer TMC which has taken the lives of scores of our party leaders and grassroots level workers since last year’s assembly elections. I won’t learn anything from corrupt people who siphon off government funds and divert aid meant for poor people to their kin,” he said.The BJP leader said he merely referred to Banerjee’s “political opportunism and inconsistency”.”She says one thing in West Bengal and something completely different in another part of the country. I only pointed that out,” Ghosh said.

During a conclave organised by a media house, Ghosh had allegedly made derogatory remarks against Banerjee’s family, while referring to her ‘Bangla nijer meyekei chay’ (Bengal wants its daughter) campaign during the West Bengal assembly elections last year and her subsequent visit to Goa, where she claimed to have felt an affinity towards the coastal state.

A TMC delegation led by MP Kakoli Ghosh Dastidar and state minister Bratya Basu met Dhankhar on Thursday and urged him to condemn Ghosh’s remarks and ensure strictest punishment for the BJP leader.”We have requested the governor to condemn Ghosh’s remarks. On various occasions, we have seen him actively calling out comments of others. We hope that on this occasion, too, he will do the same. Steps must be taken to ensure strictest punishment for the BJP leader,” Ghosh Dastidar said.She claimed that the governor promised to look into the matter.Dhankhar, later in the day, tweeted that the delegation was given assurance the matter would be taken up for consideration.”Delegation @AITCofficial sought intervention at remarks made against Hon’ble CM was assured of consideration. Indicated to delegation concerns at worrisome Constitutional transgressions, insensitive stance towards human rights and need for working in tandem for public good,” he tweeted.

The state BJP leadership, on its part, insisted that it was not in favour of personal attacks, which is the “hallmark of the TMC”, but if anyone was hurt by any comment of Ghosh, that was “unintended”.

Asked to comment over the row, BJP state spokesperson Samik Bhattacharya told PTI, “The BJP has never made any personal attack against any individual, this is not the culture of BJP. It is the TMC that had made objectionable comments against our national president, the home minister and prime minister.” “What we understand is that Ghosh gave indications about the inconsistent political stance of the TMC supremo all through her political career, and her opportunistic politics. He did not intend to attack her personally. If the TMC and Banerjee are hurt, however, we can say that it was unintended,” Bhattacharya added.