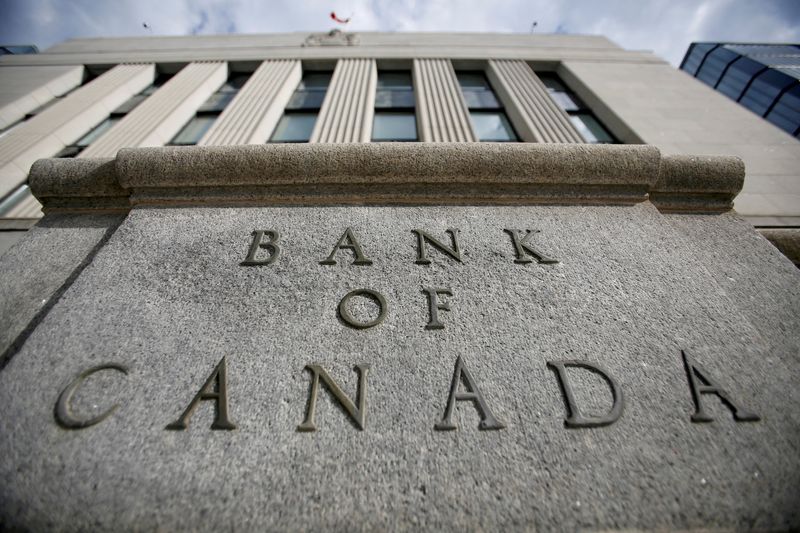 © Reuters. FILE PHOTO: A sign is pictured outside the Bank of Canada building in Ottawa, Ontario, Canada, May 23, 2017. REUTERS/Chris Wattie/File Photo

By Julie Gordon and Steve Scherer

OTTAWA (Reuters) – Canadian businesses now expect inflation to be high for longer, with firms eyeing survey-high wage increases over the next year and many planning to pass rising costs onto customers, a Bank of Canada survey showed Monday.

Consumers’ short-term expectations for price increases, meanwhile, are at record levels and Canadians generally see inflation as “more pervasive”, the central bank said in a separate survey, adding most people continue to believe prices can be tamed.

“Compared to last quarter, businesses expect inflation to be high for longer,” the bank said in its second quarter Business Outlook Survey.

Businesses continue to expect input and output prices to rise significantly and at a greater rate over the next 12 months, with inflation expected to be above 3% on average over the next two years. Nearly a quarter of firms expect price increases “well above” the 2% target for three years or more.

“Many firms continue to report plans for raising wages to attract and retain workers,” the bank said, with businesses now expecting wage increases of 5.8% on average over the next 12 months, up from 5.2% in the previous survey.

This as capacity pressures remain elevated and supply chain issues continue to increase costs. Still an increasing number of firms now foresee the pace of growth slowing to normal, with more economic uncertainty adding to risks, the survey found.

Canada’s inflation rate hit 7.7% in May, a near 40-year high. The survey will likely reinforce expectations of a 75-basis point increase at the next Bank of Canada rate decision on July 13.

To catch a rare-book thief