Sunak launched his candidacy to become Tory leader on Friday, with a video in which he pledged to end “comforting fairy tales” — a coded attack on Johnson’s time as prime minister.

I’m standing to be the next leader of the Conservative Party and your Prime Minister.

A cabinet minister loyal to Johnson said his allies would try to ensure Sunak did not win the leadership contest. “Rishi will get everything he deserves for leading the charge in bringing down the prime minister,” he said. Sunak’s team declined to comment.

Johnson’s allies also accused Sunak of having the wrong approach on the economy while chancellor. One Number 10 insider said: “He had no real plan for growth, [and was] just obsessed with balancing the books.”

Jacob Rees-Mogg, the Brexit Opportunities minister and Johnson loyalist, described Sunak in a cabinet meeting on Thursday as “the much-lamented socialist chancellor”.

But another senior government insider said Johnson saw Sunak as a “great chancellor” and noted that he had stated in his resignation letter he would “miss working with him”.

Several bookmakers have put Sunak, 42, as favourite to become the next Conservative leader, and many Tory MPs also see him as the leading contender.

But he is unpopular with some Conservative MPs because of the tax rises he introduced to pay for emergency government support during the Covid-19 pandemic and better public services afterwards. The tax burden is on track to rise to its highest level since the late 1940s.

Sunak’s video focused on trying to move the Tories on from the scandal and tumult that undermined Johnson. “Let’s restore trust, rebuild the economy and reunite the country,” he said.

The former chancellor signalled that his policy platform would concentrate on fiscal discipline — on which he clashed with Johnson.

“Do we confront this moment with honesty, seriousness and determination?” asked Sunak. “Or do we tell ourselves comforting fairy tales that might make us feel better in the moment but will leave our children worse off tomorrow?” 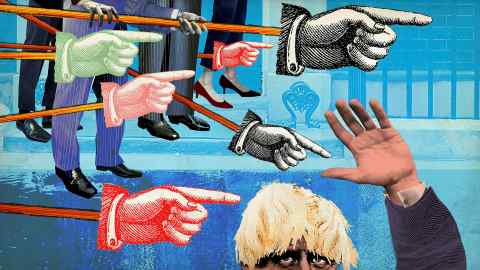 Sunak, son of first-generation migrants to the UK, used his video to speak of the importance of family values and the opportunities he had gained in his life. He has already won the first major endorsements of the leadership contest: former Tory chief whips Mark Harper and Mark Spencer.

Truss is expected to announce her candidacy imminently and is set to emphasise “fiscal credibility”, with tax cuts funded by a smaller state over the longer term.

Tom Tugendhat, chair of the House of Commons foreign affairs select committee, said on Friday he would seek to succeed Johnson. “It’s time for a clean start,” he said. “It’s time for renewal.”

Suella Braverman, attorney-general, said on Wednesday she would stand for the party leadership.

Meanwhile, Johnson continued to appoint junior ministers to fill the significant gaps in his government. Peter Bone, a veteran Tory MP, was given the new role of deputy leader of the Commons.