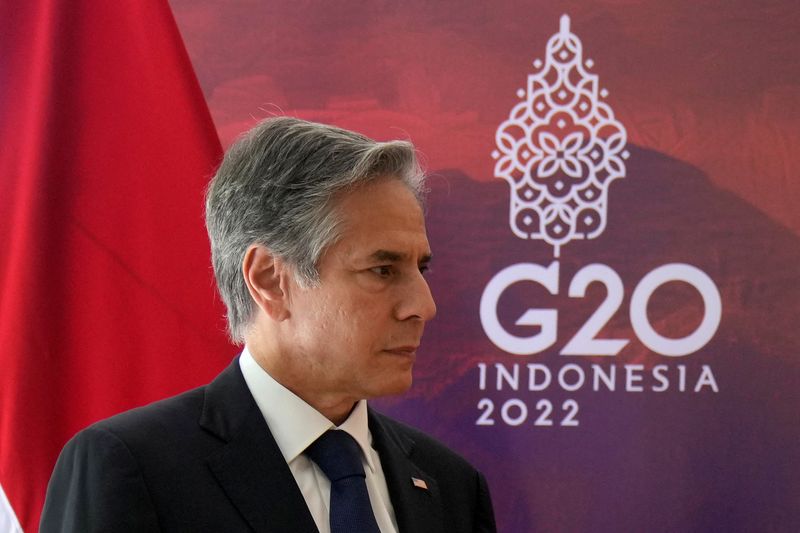 NUSA DUA, Indonesia (Reuters) – U.S. Secretary of State Antony Blinken meets with China’s Foreign Minister Wang Yi in Bali on Saturday after a G20 ministerial meeting on the Indonesian island where the top U.S. diplomat led efforts to pressure Russia over its war in Ukraine.

U.S. officials say Blinken’s first face-to-face meeting with Wang since October, which includes a morning session of talks and a working lunch, is aimed at keeping the difficult U.S. relationship with Beijing stable and preventing it from veering inadvertently into conflict.

Blinken is expected to repeat warnings to China not to support Moscow’s war effort in Ukraine and the two sides will address contentious issues that include Taiwan, China’s extensive South China Sea claims, Beijing’s moves to expand its influence throughout the Pacific, human rights, and trade tariffs.

However, both sides share an interest in keeping the relationship stable and Blinken and U.S. officials say U.S. President Joe Biden and Chinese President Xi Jinping are expected to speak again coming weeks, something Saturday’s meeting is likely to address.

Daniel Russel, a top U.S. diplomat for East Asia under former President Barack Obama who has close contact with Biden administration officials, said he believed a key aim for the meeting would be to explore the possibility of an in-person meeting between Biden and Xi, their first as leaders, possibly on the sidelines of the G20 summit in Bali in November.

Washington calls China its main strategic rival and is concerned it might one day attempt to take over the self-ruled democratic island of Taiwan, just as Russia attacked Ukraine.

The current top U.S. diplomat for East Asia, Daniel Kritenbrink, said on Tuesday he expected a “candid” exchange with Wang and said it would be another opportunity “to convey our expectations about what we would expect China to do and not to do in the context of Ukraine.”

Shortly before Russia’s Feb. 24 Ukraine invasion, Beijing and Moscow announced a “no limits” partnership. But U.S. officials have said they have not seen China evade tough U.S.-led sanctions on Moscow or provide military equipment to Russia.

However, China has refused to condemn Russia’s actions and criticized the sweeping sanctions. U.S. officials have warned of consequences, including sanctions, should China start offering material support for Russia’s war effort, which Moscow calls a “special military operation” to degrade the Ukrainian military though Kyiv counters that it is an imperial-style land grab.

U.S. officials are not expecting specific outcomes from Saturday’s talks, but Kritenbrink said it was “critical” to maintain open lines of communication with China to “prevent any miscalculation that could lead inadvertently to conflict and confrontation.”

The meeting will be the latest high-level U.S.-China contact.

Despite their strategic rivalry, the world’s two largest economies remain major trading partners and Biden has been considering scrapping tariffs on a range of Chinese goods to curb surging U.S. inflation before the November midterm elections, with control of Congress in focus.

Analysts say Xi has an interest in maintaining stable relations with Washington for the time being as he seeks an unprecedented third term at a congress of the ruling Communist Party later this year.

The White House said on Tuesday it is still looking at options on whether to cut tariffs on Chinese imports, even as industry requests to keep the duties in place mounted. No breakthrough announcement is expected from Blinken and Wang’s meeting on Saturday.

Musk wants out of his $44B Twitter deal – TechCrunch