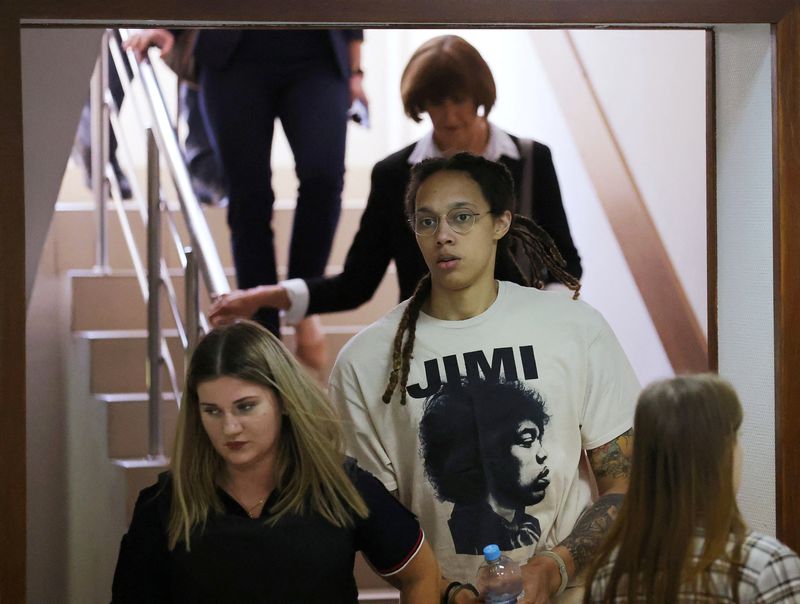 © Reuters. FILE PHOTO: U.S. basketball player Brittney Griner, who was detained in March at Moscow’s Sheremetyevo airport and later charged with illegal possession of cannabis, is escorted before a court hearing in Khimki outside Moscow, Russia July 1, 2022. REUTERS

(Reuters) – U.S. WNBA basketball star Brittney Griner has made a direct plea to President Joe Biden to stand up for her in an emotional letter sent to the White House on Monday as she remains detained in Russia on drug charges.

Griner, who was held at a Moscow airport on Feb. 17 when a search of her luggage allegedly revealed multiple cannabis oil vape cartridges, went on trial on Friday and could face up to 10 years in a Russian jail.

The case takes place against a backdrop of high tension between Moscow and Washington over the conflict in Ukraine. U.S. officials say Griner has been detained wrongfully.

“As I sit here in a Russian prison, alone with my thoughts and without the protection of my wife, family, friends, Olympic jersey, or any accomplishments, I’m terrified I might be here forever,” she wrote in a letter, excerpts of which have been shared by her representatives.

“On the 4th of July, our family normally honors the service of those who fought for our freedom, including my father who is a Vietnam War Veteran.

“It hurts thinking about how I usually celebrate this day because freedom means something completely different to me this year.”

Griner, who competes in the U.S. Women’s National Basketball Association (WNBA) but has also played regularly in Russia, was formally told at the first hearing that she was charged with intentionally importing narcotics into Russia.

The judge set the next hearing for July 7.

“I realize you are dealing with so much, but please don’t forget about me and the other American Detainees. Please do all you can to bring us home,” Griner added.

“I voted for the first time in 2020 and I voted for you. I believe in you. I still have so much good to do with my freedom that you can help restore.

“I miss my wife! I miss my family! I miss my teammates! It kills me to know they are suffering so much right now. I am grateful for whatever you can do at this moment to get me home.”