Argentina has appointed a relatively unknown former provincial official as its economy minister after the abrupt departure of predecessor Martin Guzmán, who negotiated a $44bn debt restructuring deal with the IMF.

Silvina Batakis, 53, was set to take over on Monday after Guzmán, a close ally of President Alberto Fernández, became the most senior of four Argentine cabinet members to step down in recent months amid a split in the ruling coalition government.

Deep divisions within Argentina’s leftwing ruling coalition have pitted the country’s powerful vice-president and former leader, Cristina Fernández de Kirchner, against the president, as problems in the economy worsen.

Financial analysts said the appointment of Batakis, a former finance minister of Buenos Aires province who most recently worked at the interior ministry, would do little to calm the negative sentiment in the markets, given her links to the more radical wing of the Peronist government allied to Fernández de Kirchner.

The market reaction on Monday was muted given the July 4 holiday in the US where Argentine bonds are more widely traded. Argentina’s official currency rate, kept artificially high in an attempt to control inflation, weakened 0.5 per cent to 126 pesos per $1. The parallel exchange rate widened almost 15 per cent in early trading to 280 pesos per $1.

“The market was already fragile and now it’s going to be terrified,” said Riccardo Grassi, head of risk management at the Swiss-based hedge fund Mangart Capital Advisors, which was involved in the debt restructuring led by Guzmán in 2020.

Speaking of Batakis’s appointment, economist Fernando Marull said the markets would “take it badly”. He added: “She’s not well known . . . and our more pessimistic scenario of the economy now looks more likely.”

Batakis is a career civil servant who as finance minister for Buenos Aires province from 2011 to 2015 defended price controls, market intervention and higher wealth and inheritance tax.

Fernández de Kirchner and her allies have repeatedly criticised the IMF deal, which Guzmán brokered, calling instead for higher spending and more government intervention to combat inflation and poverty.

The agreement refinanced $44bn in debt outstanding from a record amount that Argentina borrowed from the IMF in 2018, a loan that quickly veered off track. It is the 22nd deal since Argentina joined the IMF in 1956.

Guzmán had been due to travel to France this week to renegotiate more than $2bn owed to the Paris Club of creditor nations. It is unclear if Batakis will go in his place. Argentina had been granted more time to pay off the debt as it has been negotiating the separate IMF programme.

Argentina is in the grip of a spiralling economic crisis, with inflation forecast to exceed 70 per cent this year. Its sovereign bonds have traded at deeply distressed levels, hovering just above 20 cents on the dollar. Pressure on the currency is building despite exchange controls and a costly energy import bill is preventing Buenos Aires from building dollar reserves. 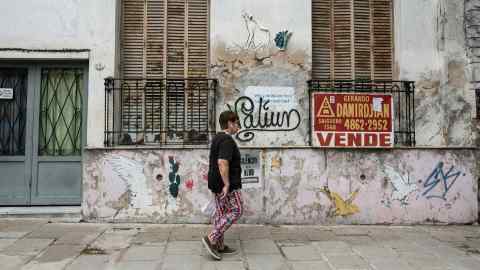 Guzmán’s departure after more than two years in the job was a further blow to the president, whose poll ratings have slumped.

William Jackson, chief emerging markets economist at Capital Economics, pointed to how the rising influence of Fernández de Kirchner could push Argentina “further away from the path towards macro stability”, and that “a sovereign default is starting to look increasingly likely”.

It remained unclear if further cabinet changes were planned. Miguel Ángel Pesce, head of the central bank, confirmed on Sunday that he expected to remain in his role.

Pesce and the new finance minister pledged on Monday to follow a “sustainable fiscal programme” to address investor concerns in the wake of Guzmán quitting.

“Batakis and Pesce shared the importance of continuing to work on a sustainable fiscal programme and the accumulation of reserves,” the central bank said in a statement, adding that the two also agreed on the need to strengthen local capital markets.

Robocalls Are (Finally) Being Shaken Up