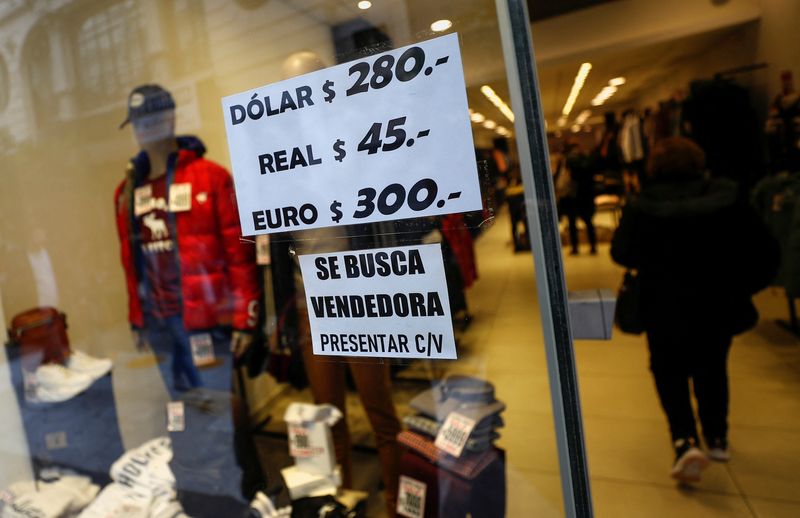 By Jorge Otaola and Walter Bianchi

BUENOS AIRES (Reuters) -Argentina’s closely watched black market peso crashed on Monday after the country’s economy minister quit abruptly over the weekend and was replaced by an economist more closely aligned with the far-left wing of the ruling Peronist coalition.

Argentine President Alberto Fernandez was set to swear in economist Silvina Batakis on Monday after the shock exit of long-standing minister Martin Guzman at a time of growing economic crises and tensions within the government.

The peso-dollar rate on the popular black market crashed to around 267 per dollar, well over double the controlled official spot rate which edged lower to 126 pesos. Equities and bonds, already in distressed territory, also lost ground.

Guzman was architect of a $44 billion deal sealed this year with the International Monetary Fund (IMF). His exit brought splits in the government to the surface, further weakened President Fernandez ahead of 2023 elections and stoked investor fears of looser monetary policy.

“The first announcements from Batakis will likely be key,” said Citi Research in a note, adding that any shift toward price controls and further FX restrictions could move the country towards economic “populism”.

Then, “the deterioration in sentiment and market conditions that has been taking place in the last few weeks could accelerate,” the bank added.

Currency controls in place since 2019 have kept the official peso exchange rate on a slowly weakening path, but the gap to popular parallel markets has become increasingly wide given a swirling economic crises, high inflation and debt fears.

Investors fear a shift towards heterodox, or non-orthodox, economic policy. Guzman had been seen as a moderating influence, while Batakis is more closely aligned with the harder-left wing of the ruling Peronist coalition that wants more spending to alleviate high poverty levels.

Local consultancy Portfolio Personal Inversiones said Batakis would likely be largely led by the ‘Kirchnerists’ around the Vice President. Citi agreed she would not create the same “balancing force” to the Vice President as Guzman had.

Presidential spokeswoman Gabriela Cerruti told local radio that there would be “no modifications” under Batakis.

“The economic direction is guaranteed. The goals (with the IMF) for the first quarter were fully met. Now Silvina has to sit down and take charge of the Ministry and come up with her own operating scheme,” Cerruti said.